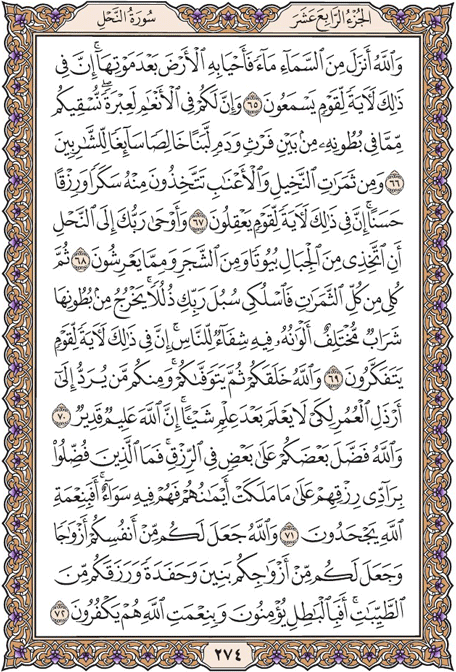 And Allah has sent down rain from the sky and given life thereby to the earth after its lifelessness. Indeed in that is a sign for a people who listen.

And indeed, for you in grazing livestock is a lesson. We give you drink from what is in their bellies - between excretion and blood - pure milk, palatable to drinkers.

And from the fruits of the palm trees and grapevines you take intoxicant and good provision. Indeed in that is a sign for a people who reason.

And your Lord inspired to the bee, |Take for yourself among the mountains, houses, and among the trees and [in] that which they construct.

Then eat from all the fruits and follow the ways of your Lord laid down [for you].| There emerges from their bellies a drink, varying in colors, in which there is healing for people. Indeed in that is a sign for a people who give thought.

And Allah created you; then He will take you in death. And among you is he who is reversed to the most decrepit [old] age so that he will not know, after [having had] knowledge, a thing. Indeed, Allah is Knowing and Competent.

And Allah has favored some of you over others in provision. But those who were favored would not hand over their provision to those whom their right hands possess so they would be equal to them therein. Then is it the favor of Allah they reject?