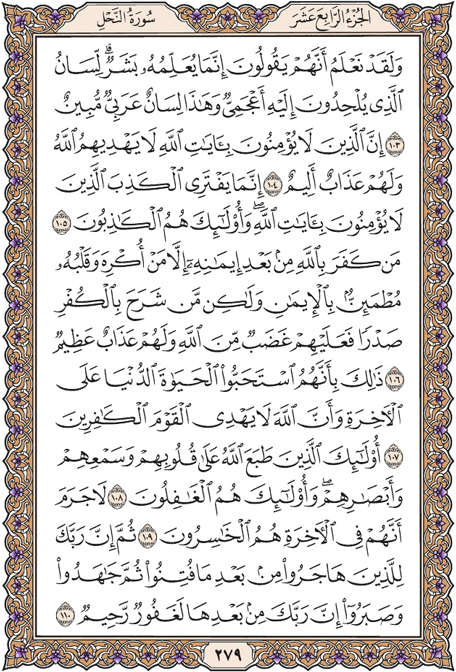 And We certainly know that they say, |It is only a human being who teaches the Prophet.| The tongue of the one they refer to is foreign, and this Qur'an is [in] a clear Arabic language.

Indeed, those who do not believe in the verses of Allah - Allah will not guide them, and for them is a painful punishment.

They only invent falsehood who do not believe in the verses of Allah , and it is those who are the liars.

Whoever disbelieves in Allah after his belief... except for one who is forced [to renounce his religion] while his heart is secure in faith. But those who [willingly] open their breasts to disbelief, upon them is wrath from Allah , and for them is a great punishment;

That is because they preferred the worldly life over the Hereafter and that Allah does not guide the disbelieving people.

Those are the ones over whose hearts and hearing and vision Allah has sealed, and it is those who are the heedless.

Assuredly, it is they, in the Hereafter, who will be the losers.

Then, indeed your Lord, to those who emigrated after they had been compelled [to renounce their religion] and thereafter fought [for the cause of Allah ] and were patient - indeed, your Lord, after that, is Forgiving and Merciful