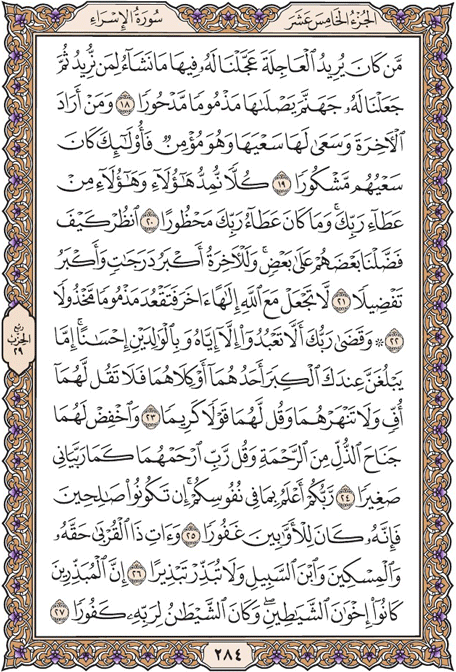 Whoever should desire the immediate - We hasten for him from it what We will to whom We intend. Then We have made for him Hell, which he will [enter to] burn, censured and banished.

But whoever desires the Hereafter and exerts the effort due to it while he is a believer - it is those whose effort is ever appreciated [by Allah ].

Look how We have favored [in provision] some of them over others. But the Hereafter is greater in degrees [of difference] and greater in distinction.

Do not make [as equal] with Allah another deity and [thereby] become censured and forsaken.

And your Lord has decreed that you not worship except Him, and to parents, good treatment. Whether one or both of them reach old age [while] with you, say not to them [so much as], |uff,| and do not repel them but speak to them a noble word.

And lower to them the wing of humility out of mercy and say, |My Lord, have mercy upon them as they brought me up [when I was] small.

Your Lord is most knowing of what is within yourselves. If you should be righteous [in intention] - then indeed He is ever, to the often returning [to Him], Forgiving.

And give the relative his right, and [also] the poor and the traveler, and do not spend wastefully.

Indeed, the wasteful are brothers of the devils, and ever has Satan been to his Lord ungrateful.