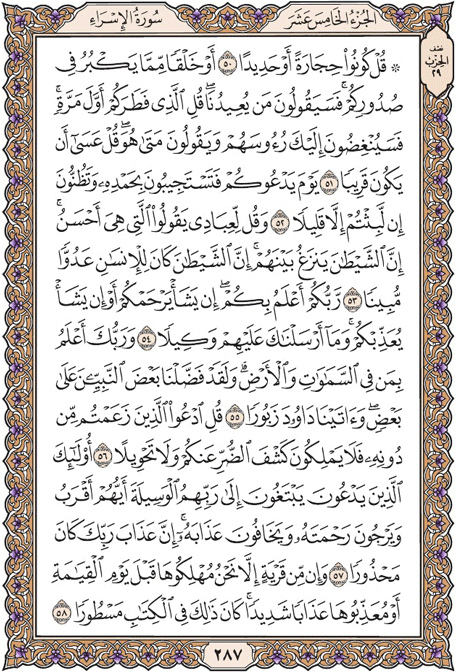 Say, |Be you stones or iron

Or [any] creation of that which is great within your breasts.| And they will say, |Who will restore us?| Say, |He who brought you forth the first time.| Then they will nod their heads toward you and say, |When is that?| Say, |Perhaps it will be soon -

On the Day He will call you and you will respond with praise of Him and think that you had not remained [in the world] except for a little.

And tell My servants to say that which is best. Indeed, Satan induces [dissension] among them. Indeed Satan is ever, to mankind, a clear enemy.

And your Lord is most knowing of whoever is in the heavens and the earth. And We have made some of the prophets exceed others [in various ways], and to David We gave the book [of Psalms].

Say, |Invoke those you have claimed [as gods] besides Him, for they do not possess the [ability for] removal of adversity from you or [for its] transfer [to someone else].

Those whom they invoke seek means of access to their Lord, [striving as to] which of them would be nearest, and they hope for His mercy and fear His punishment. Indeed, the punishment of your Lord is ever feared.

And there is no city but that We will destroy it before the Day of Resurrection or punish it with a severe punishment. That has ever been in the Register inscribed.