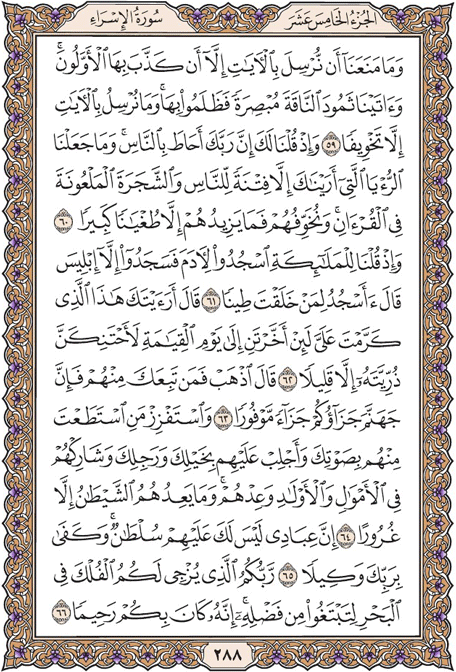 And nothing has prevented Us from sending signs except that the former peoples denied them. And We gave Thamud the she-camel as a visible sign, but they wronged her. And We send not the signs except as a warning.

And [remember, O Muúammad], when We told you, |Indeed, your Lord has encompassed the people.| And We did not make the sight which We showed you except as a trial for the people, as was the accursed tree [mentioned] in the Qur'an. And We threaten them, but it increases them not except in great transgression.

And [mention] when We said to the angles, |Prostrate to Adam,| and they prostrated, except for Iblees. He said, |Should I prostrate to one You created from clay?|

[Iblees] said, |Do You see this one whom You have honored above me? If You delay me until the Day of Resurrection, I will surely destroy his descendants, except for a few.

[ Allah ] said, |Go, for whoever of them follows you, indeed Hell will be the recompense of you - an ample recompense.

And incite [to senselessness] whoever you can among them with your voice and assault them with your horses and foot soldiers and become a partner in their wealth and their children and promise them.| But Satan does not promise them except delusion.

Indeed, over My [believing] servants there is for you no authority. And sufficient is your Lord as Disposer of affairs.

It is your Lord who drives the ship for you through the sea that you may seek of His bounty. Indeed, He is ever, to you, Merciful.