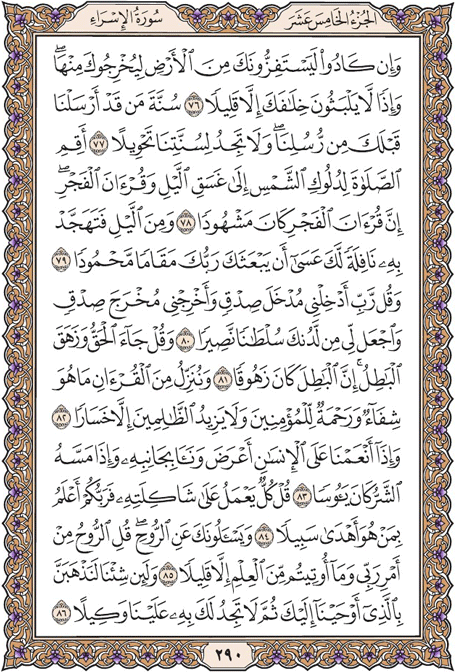 And indeed, they were about to drive you from the land to evict you therefrom. And then [when they do], they will not remain [there] after you, except for a little.

[That is Our] established way for those We had sent before you of Our messengers; and you will not find in Our way any alteration.

Establish prayer at the decline of the sun [from its meridian] until the darkness of the night and [also] the Qur'an of dawn. Indeed, the recitation of dawn is ever witnessed.

And from [part of] the night, pray with it as additional [worship] for you; it is expected that your Lord will resurrect you to a praised station.

And say, |My Lord, cause me to enter a sound entrance and to exit a sound exit and grant me from Yourself a supporting authority.

And say, |Truth has come, and falsehood has departed. Indeed is falsehood, [by nature], ever bound to depart.

And We send down of the Qur'an that which is healing and mercy for the believers, but it does not increase the wrongdoers except in loss.

And when We bestow favor upon the disbeliever, he turns away and distances himself; and when evil touches him, he is ever despairing.

Say, |Each works according to his manner, but your Lord is most knowing of who is best guided in way.

And they ask you, [O Muúammad], about the soul. Say, |The soul is of the affair of my Lord. And mankind have not been given of knowledge except a little.

And if We willed, We could surely do away with that which We revealed to you. Then you would not find for yourself concerning it an advocate against Us.