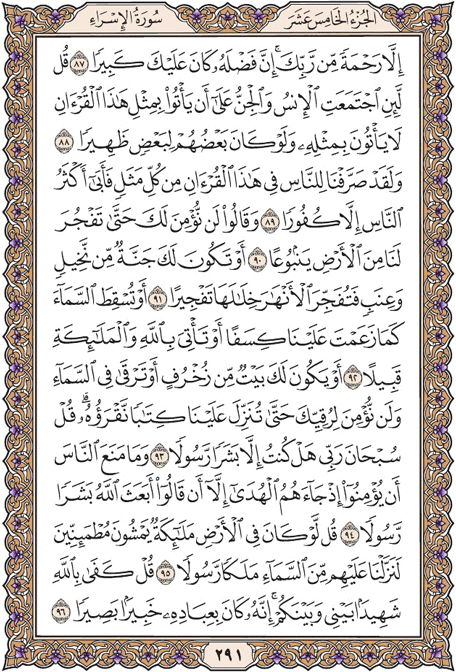 Except [We have left it with you] as a mercy from your Lord. Indeed, His favor upon you has ever been great.

And We have certainly diversified for the people in this Qur'an from every [kind] of example, but most of the people refused [anything] except disbelief.

And they say, |We will not believe you until you break open for us from the ground a spring.

Or you have a house of gold or you ascend into the sky. And [even then], we will not believe in your ascension until you bring down to us a book we may read.| Say, |Exalted is my Lord! Was I ever but a human messenger?|

And what prevented the people from believing when guidance came to them except that they said, |Has Allah sent a human messenger?|

Say, |If there were upon the earth angels walking securely, We would have sent down to them from the heaven an angel [as a] messenger.

Say, |Sufficient is Allah as Witness between me and you. Indeed he is ever, concerning His servants, Acquainted and Seeing.