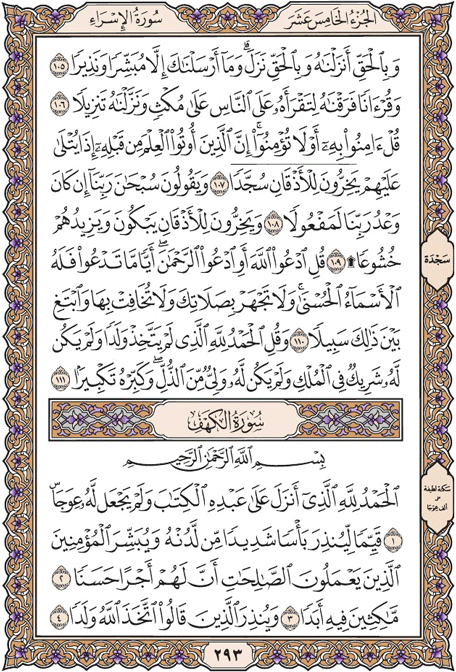 And [it is] a Qur'an which We have separated [by intervals] that you might recite it to the people over a prolonged period. And We have sent it down progressively.

Say, |Believe in it or do not believe. Indeed, those who were given knowledge before it - when it is recited to them, they fall upon their faces in prostration,

And they say, |Exalted is our Lord! Indeed, the promise of our Lord has been fulfilled.

And they fall upon their faces weeping, and the Qur'an increases them in humble submission.

Say, |Call upon Allah or call upon the Most Merciful. Whichever [name] you call - to Him belong the best names.| And do not recite [too] loudly in your prayer or [too] quietly but seek between that an [intermediate] way.

And say, |Praise to Allah , who has not taken a son and has had no partner in [His] dominion and has no [need of a] protector out of weakness; and glorify Him with [great] glorification.

[All] praise is [due] to Allah , who has sent down upon His Servant the Book and has not made therein any deviance.

[He has made it] straight, to warn of severe punishment from Him and to give good tidings to the believers who do righteous deeds that they will have a good reward

In which they will remain forever

And to warn those who say, | Allah has taken a son.