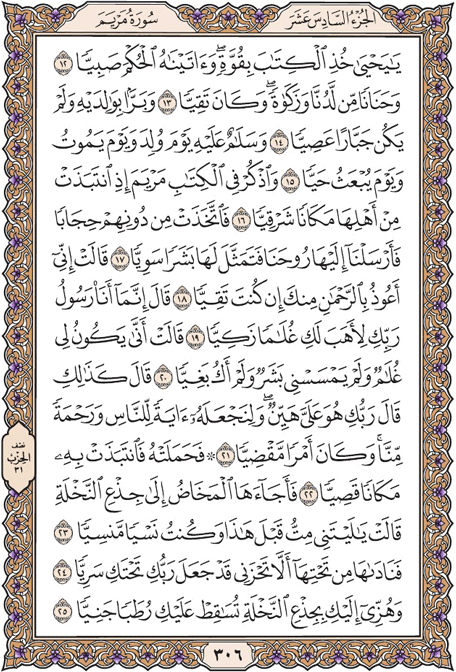 [ Allah ] said, |O John, take the Scripture with determination.| And We gave him judgement [while yet] a boy

And affection from Us and purity, and he was fearing of Allah

And dutiful to his parents, and he was not a disobedient tyrant.

And mention, [O Muúammad], in the Book [the story of] Mary, when she withdrew from her family to a place toward the east.

And she took, in seclusion from them, a screen. Then We sent to her Our Angel, and he represented himself to her as a well-proportioned man.

She said, |Indeed, I seek refuge in the Most Merciful from you, [so leave me], if you should be fearing of Allah .

He said, |I am only the messenger of your Lord to give you [news of] a pure boy.

She said, |How can I have a boy while no man has touched me and I have not been unchaste?|

He said, |Thus [it will be]; your Lord says, 'It is easy for Me, and We will make him a sign to the people and a mercy from Us. And it is a matter [already] decreed.' |

So she conceived him, and she withdrew with him to a remote place.

And the pains of childbirth drove her to the trunk of a palm tree. She said, |Oh, I wish I had died before this and was in oblivion, forgotten.

But he called her from below her, |Do not grieve; your Lord has provided beneath you a stream.

And shake toward you the trunk of the palm tree; it will drop upon you ripe, fresh dates.