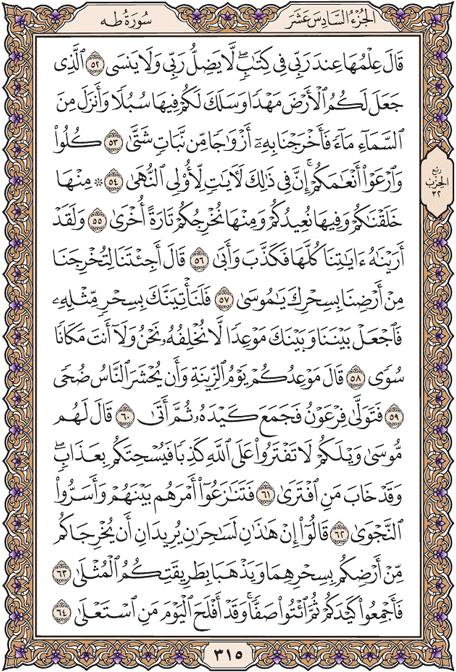 [Moses] said, |The knowledge thereof is with my Lord in a record. My Lord neither errs nor forgets.

[It is He] who has made for you the earth as a bed [spread out] and inserted therein for you roadways and sent down from the sky, rain and produced thereby categories of various plants.

Eat [therefrom] and pasture your livestock. Indeed, in that are signs for those of intelligence.

From the earth We created you, and into it We will return you, and from it We will extract you another time.

And We certainly showed Pharaoh Our signs - all of them - but he denied and refused.

He said, |Have you come to us to drive us out of our land with your magic, O Moses?

Then we will surely bring you magic like it, so make between us and you an appointment, which we will not fail to keep and neither will you, in a place assigned.

[Moses] said, |Your appointment is on the day of the festival when the people assemble at mid-morning.

So Pharaoh went away, put together his plan, and then came [to Moses].

Moses said to the magicians summoned by Pharaoh, |Woe to you! Do not invent a lie against Allah or He will exterminate you with a punishment; and he has failed who invents [such falsehood].

So they disputed over their affair among themselves and concealed their private conversation.

They said, |Indeed, these are two magicians who want to drive you out of your land with their magic and do away with your most exemplary way.

So resolve upon your plan and then come [forward] in line. And he has succeeded today who overcomes.