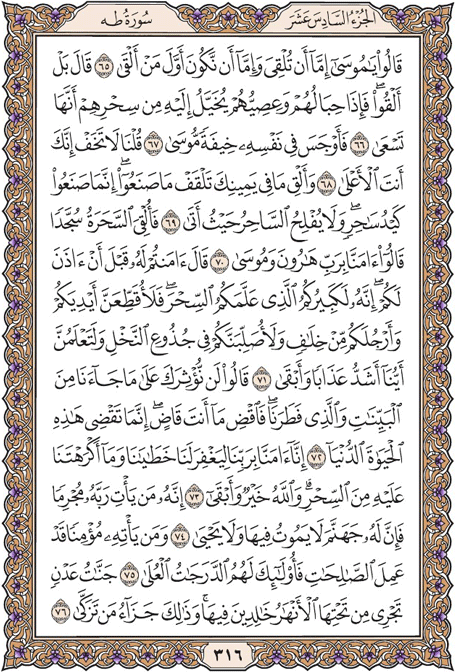 They said, |O Moses, either you throw or we will be the first to throw.

He said, |Rather, you throw.| And suddenly their ropes and staffs seemed to him from their magic that they were moving [like snakes].

And he sensed within himself apprehension, did Moses.

Allah said, |Fear not. Indeed, it is you who are superior.

So the magicians fell down in prostration. They said, |We have believed in the Lord of Aaron and Moses.

[Pharaoh] said, |You believed him before I gave you permission. Indeed, he is your leader who has taught you magic. So I will surely cut off your hands and your feet on opposite sides, and I will crucify you on the trunks of palm trees, and you will surely know which of us is more severe in [giving] punishment and more enduring.

They said, |Never will we prefer you over what has come to us of clear proofs and [over] He who created us. So decree whatever you are to decree. You can only decree for this worldly life.

Indeed, we have believed in our Lord that He may forgive us our sins and what you compelled us [to do] of magic. And Allah is better and more enduring.

Indeed, whoever comes to his Lord as a criminal - indeed, for him is Hell; he will neither die therein nor live.

But whoever comes to Him as a believer having done righteous deeds - for those will be the highest degrees [in position]:

Gardens of perpetual residence beneath which rivers flow, wherein they abide eternally. And that is the reward of one who purifies himself.