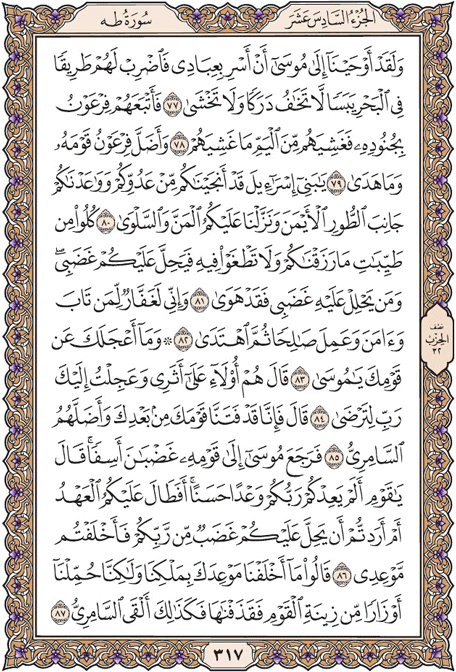 And We had inspired to Moses, |Travel by night with My servants and strike for them a dry path through the sea; you will not fear being overtaken [by Pharaoh] nor be afraid [of drowning].

So Pharaoh pursued them with his soldiers, and there covered them from the sea that which covered them,

And Pharaoh led his people astray and did not guide [them].

O Children of Israel, We delivered you from your enemy, and We made an appointment with you at the right side of the mount, and We sent down to you manna and quails,

[Saying], |Eat from the good things with which We have provided you and do not transgress [or oppress others] therein, lest My anger should descend upon you. And he upon whom My anger descends has certainly fallen.

But indeed, I am the Perpetual Forgiver of whoever repents and believes and does righteousness and then continues in guidance.

[ Allah ] said, |And what made you hasten from your people, O Moses?|

He said, |They are close upon my tracks, and I hastened to You, my Lord, that You be pleased.

[ Allah ] said, |But indeed, We have tried your people after you [departed], and the Samiri has led them astray.

So Moses returned to his people, angry and grieved. He said, |O my people, did your Lord not make you a good promise? Then, was the time [of its fulfillment] too long for you, or did you wish that wrath from your Lord descend upon you, so you broke your promise [of obedience] to me?|

They said, |We did not break our promise to you by our will, but we were made to carry burdens from the ornaments of the people [of Pharaoh], so we threw them [into the fire], and thus did the Samiri throw.