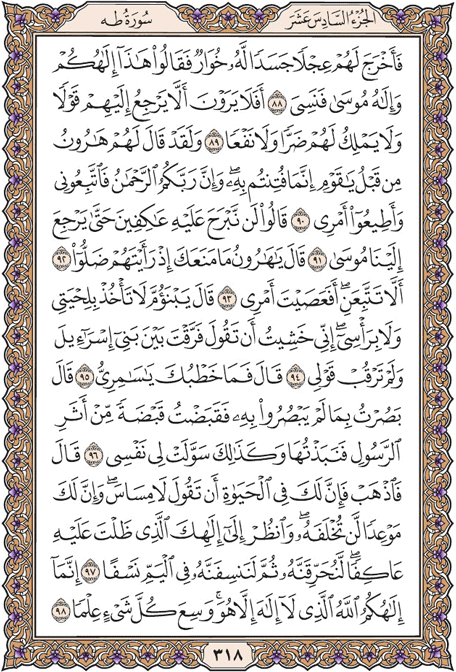 And he extracted for them [the statue of] a calf which had a lowing sound, and they said, |This is your god and the god of Moses, but he forgot.

Did they not see that it could not return to them any speech and that it did not possess for them any harm or benefit?

And Aaron had already told them before [the return of Moses], |O my people, you are only being tested by it, and indeed, your Lord is the Most Merciful, so follow me and obey my order.

They said, |We will never cease being devoted to the calf until Moses returns to us.

[Moses] said, |O Aaron, what prevented you, when you saw them going astray,

From following me? Then have you disobeyed my order?|

[Aaron] said, |O son of my mother, do not seize [me] by my beard or by my head. Indeed, I feared that you would say, 'You caused division among the Children of Israel, and you did not observe [or await] my word.' |

He said, |I saw what they did not see, so I took a handful [of dust] from the track of the messenger and threw it, and thus did my soul entice me.

[Moses] said, |Then go. And indeed, it is [decreed] for you in [this] life to say, 'No contact.' And indeed, you have an appointment [in the Hereafter] you will not fail to keep. And look at your 'god' to which you remained devoted. We will surely burn it and blow it into the sea with a blast.

Your god is only Allah , except for whom there is no deity. He has encompassed all things in knowledge.