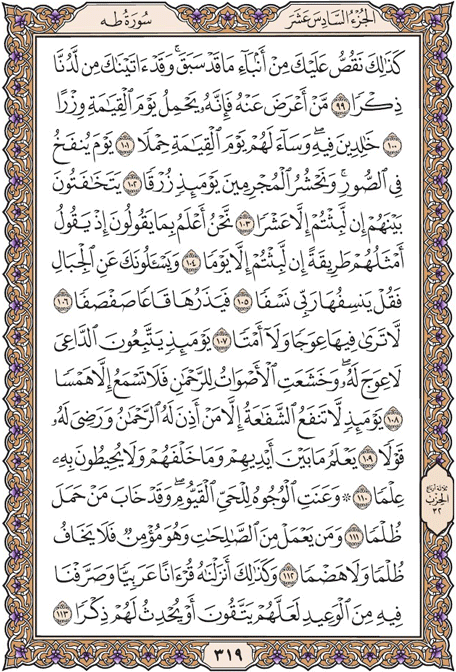 Thus, [O Muúammad], We relate to you from the news of what has preceded. And We have certainly given you from Us the Qur'an.

Whoever turns away from it - then indeed, he will bear on the Day of Resurrection a burden,

[Abiding] eternally therein, and evil it is for them on the Day of Resurrection as a load -

The Day the Horn will be blown. And We will gather the criminals, that Day, blue-eyed.

They will murmur among themselves, |You remained not but ten [days in the world].

We are most knowing of what they say when the best of them in manner will say, |You remained not but one day.

And they ask you about the mountains, so say, |My Lord will blow them away with a blast.

And He will leave the earth a level plain;

You will not see therein a depression or an elevation.

That Day, everyone will follow [the call of] the Caller [with] no deviation therefrom, and [all] voices will be stilled before the Most Merciful, so you will not hear except a whisper [of footsteps].

That Day, no intercession will benefit except [that of] one to whom the Most Merciful has given permission and has accepted his word.

Allah knows what is [presently] before them and what will be after them, but they do not encompass it in knowledge.

And [all] faces will be humbled before the Ever-Living, the Sustainer of existence. And he will have failed who carries injustice.

But he who does of righteous deeds while he is a believer - he will neither fear injustice nor deprivation.

And thus We have sent it down as an Arabic Qur'an and have diversified therein the warnings that perhaps they will avoid [sin] or it would cause them remembrance.