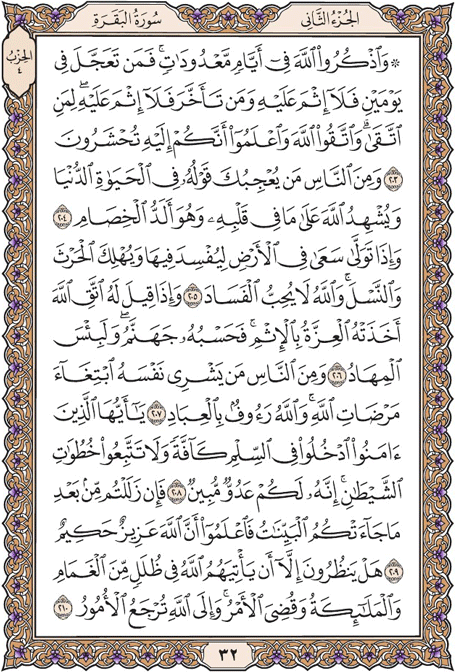 And of the people is he whose speech pleases you in worldly life, and he calls Allah to witness as to what is in his heart, yet he is the fiercest of opponents.

And when he goes away, he strives throughout the land to cause corruption therein and destroy crops and animals. And Allah does not like corruption.

And when it is said to him, |Fear Allah ,| pride in the sin takes hold of him. Sufficient for him is Hellfire, and how wretched is the resting place.

And of the people is he who sells himself, seeking means to the approval of Allah . And Allah is kind to [His] servants.

O you who have believed, enter into Islam completely [and perfectly] and do not follow the footsteps of Satan. Indeed, he is to you a clear enemy.

But if you deviate after clear proofs have come to you, then know that Allah is Exalted in Might and Wise.

Do they await but that Allah should come to them in covers of clouds and the angels [as well] and the matter is [then] decided? And to Allah [all] matters are returned.