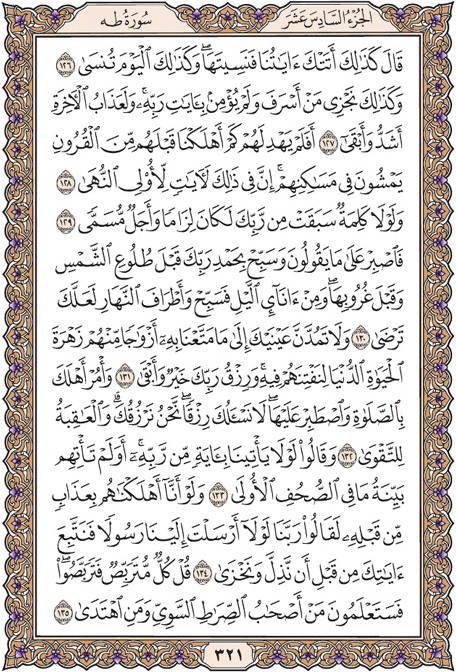 [ Allah ] will say, |Thus did Our signs come to you, and you forgot them; and thus will you this Day be forgotten.

And thus do We recompense he who transgressed and did not believe in the signs of his Lord. And the punishment of the Hereafter is more severe and more enduring.

Then, has it not become clear to them how many generations We destroyed before them as they walk among their dwellings? Indeed in that are signs for those of intelligence.

And if not for a word that preceded from your Lord, punishment would have been an obligation [due immediately], and [if not for] a specified term [decreed].

So be patient over what they say and exalt [ Allah ] with praise of your Lord before the rising of the sun and before its setting; and during periods of the night [exalt Him] and at the ends of the day, that you may be satisfied.

And do not extend your eyes toward that by which We have given enjoyment to [some] categories of them, [its being but] the splendor of worldly life by which We test them. And the provision of your Lord is better and more enduring.

And enjoin prayer upon your family [and people] and be steadfast therein. We ask you not for provision; We provide for you, and the [best] outcome is for [those of] righteousness.

And they say, |Why does he not bring us a sign from his Lord?| Has there not come to them evidence of what was in the former scriptures?

And if We had destroyed them with a punishment before him, they would have said, |Our Lord, why did You not send to us a messenger so we could have followed Your verses before we were humiliated and disgraced?|

Say, |Each [of us] is waiting; so wait. For you will know who are the companions of the sound path and who is guided.