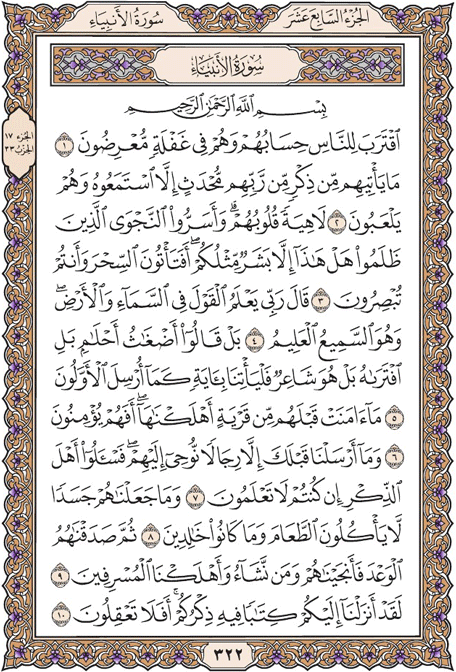 [The time of] their account has approached for the people, while they are in heedlessness turning away.

With their hearts distracted. And those who do wrong conceal their private conversation, [saying], |Is this [Prophet] except a human being like you? So would you approach magic while you are aware [of it]?|

The Prophet said, |My Lord knows whatever is said throughout the heaven and earth, and He is the Hearing, the Knowing.

But they say, |[The revelation is but] a mixture of false dreams; rather, he has invented it; rather, he is a poet. So let him bring us a sign just as the previous [messengers] were sent [with miracles].

Not a [single] city which We destroyed believed before them, so will they believe?

And We sent not before you, [O Muúammad], except men to whom We revealed [the message], so ask the people of the message if you do not know.

And We did not make the prophets forms not eating food, nor were they immortal [on earth].

Then We fulfilled for them the promise, and We saved them and whom We willed and destroyed the transgressors.

We have certainly sent down to you a Book in which is your mention. Then will you not reason?