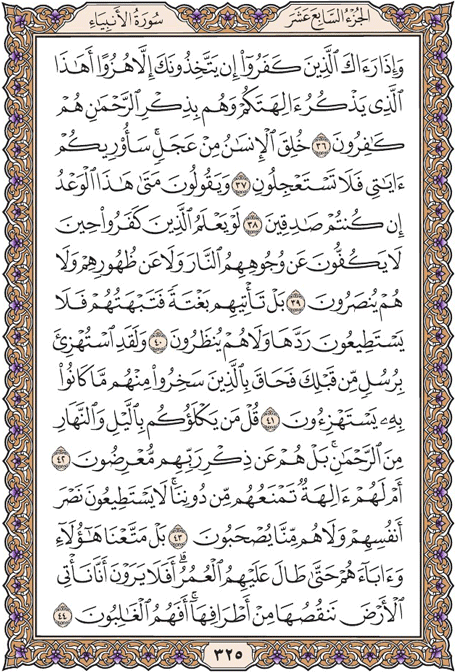 And when those who disbelieve see you, [O Muúammad], they take you not except in ridicule, [saying], |Is this the one who insults your gods?| And they are, at the mention of the Most Merciful, disbelievers.

Man was created of haste. I will show you My signs, so do not impatiently urge Me.

Rather, it will come to them unexpectedly and bewilder them, and they will not be able to repel it, nor will they be reprieved.

And already were messengers ridiculed before you, but those who mocked them were enveloped by what they used to ridicule.

Say, |Who can protect you at night or by day from the Most Merciful?| But they are, from the remembrance of their Lord, turning away.

Or do they have gods to defend them other than Us? They are unable [even] to help themselves, nor can they be protected from Us.

But, [on the contrary], We have provided good things for these [disbelievers] and their fathers until life was prolonged for them. Then do they not see that We set upon the land, reducing it from its borders? So it is they who will overcome?