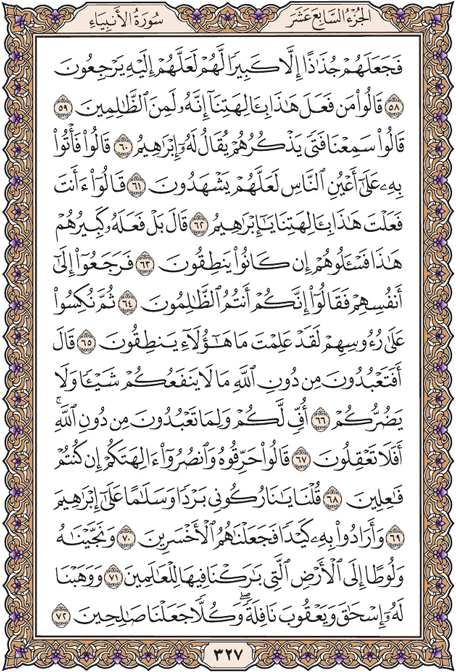 So he made them into fragments, except a large one among them, that they might return to it [and question].

They said, |Who has done this to our gods? Indeed, he is of the wrongdoers.

They said, |We heard a young man mention them who is called Abraham.

They said, |Then bring him before the eyes of the people that they may testify.

They said, |Have you done this to our gods, O Abraham?|

So they returned to [blaming] themselves and said [to each other], |Indeed, you are the wrongdoers.

Then they reversed themselves, [saying], |You have already known that these do not speak!|

He said, |Then do you worship instead of Allah that which does not benefit you at all or harm you?

Uff to you and to what you worship instead of Allah . Then will you not use reason?|

They said, |Burn him and support your gods - if you are to act.

Allah said, |O fire, be coolness and safety upon Abraham.

And they intended for him harm, but We made them the greatest losers.

And We delivered him and Lot to the land which We had blessed for the worlds.

And We gave him Isaac and Jacob in addition, and all [of them] We made righteous.