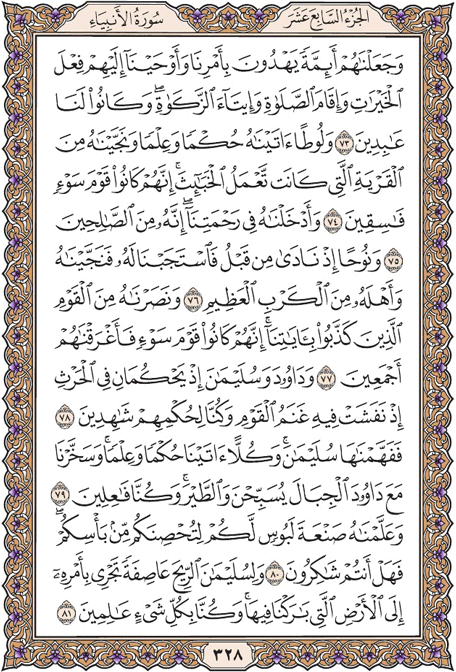 And We made them leaders guiding by Our command. And We inspired to them the doing of good deeds, establishment of prayer, and giving of zakah; and they were worshippers of Us.

And to Lot We gave judgement and knowledge, and We saved him from the city that was committing wicked deeds. Indeed, they were a people of evil, defiantly disobedient.

And We admitted him into Our mercy. Indeed, he was of the righteous.

And [mention] Noah, when he called [to Allah ] before [that time], so We responded to him and saved him and his family from the great flood.

And We saved him from the people who denied Our signs. Indeed, they were a people of evil, so We drowned them, all together.

And [mention] David and Solomon, when they judged concerning the field - when the sheep of a people overran it [at night], and We were witness to their judgement.

And We gave understanding of the case to Solomon, and to each [of them] We gave judgement and knowledge. And We subjected the mountains to exalt [Us], along with David and [also] the birds. And We were doing [that].

And We taught him the fashioning of coats of armor to protect you from your [enemy in] battle. So will you then be grateful?

And to Solomon [We subjected] the wind, blowing forcefully, proceeding by his command toward the land which We had blessed. And We are ever, of all things, Knowing.