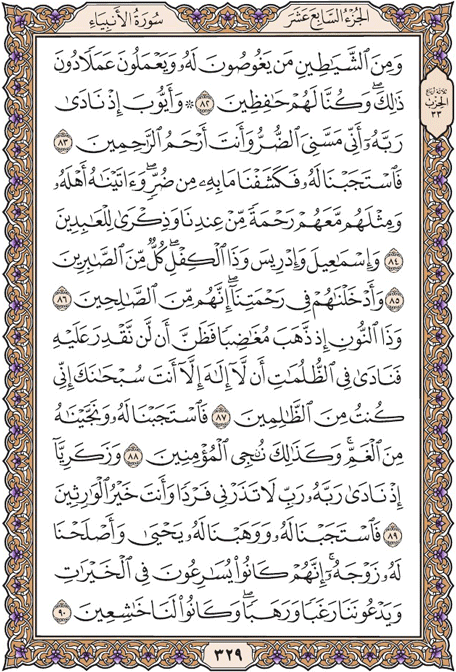 And of the devils were those who dived for him and did work other than that. And We were of them a guardian.

And [mention] Job, when he called to his Lord, |Indeed, adversity has touched me, and you are the Most Merciful of the merciful.

So We responded to him and removed what afflicted him of adversity. And We gave him [back] his family and the like thereof with them as mercy from Us and a reminder for the worshippers [of Allah ].

And [mention] Ishmael and Idrees and Dhul-Kifl; all were of the patient.

And We admitted them into Our mercy. Indeed, they were of the righteous.

And [mention] the man of the fish, when he went off in anger and thought that We would not decree [anything] upon him. And he called out within the darknesses, |There is no deity except You; exalted are You. Indeed, I have been of the wrongdoers.

So We responded to him and saved him from the distress. And thus do We save the believers.

And [mention] Zechariah, when he called to his Lord, |My Lord, do not leave me alone [with no heir], while you are the best of inheritors.

So We responded to him, and We gave to him John, and amended for him his wife. Indeed, they used to hasten to good deeds and supplicate Us in hope and fear, and they were to Us humbly submissive.