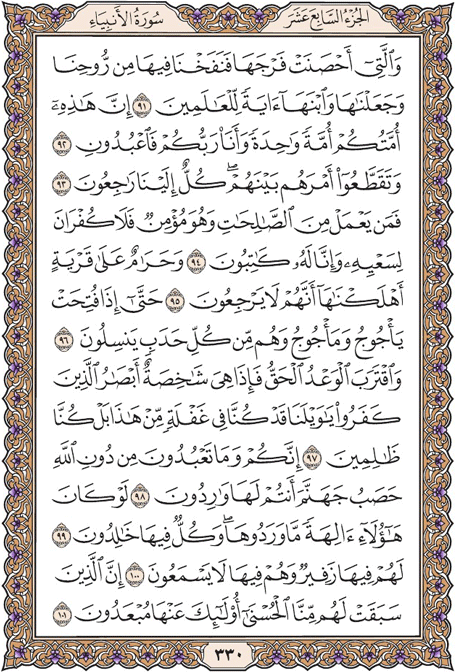 And [mention] the one who guarded her chastity, so We blew into her [garment] through Our angel [Gabriel], and We made her and her son a sign for the worlds.

Indeed this, your religion, is one religion, and I am your Lord, so worship Me.

And [yet] they divided their affair among themselves, [but] all to Us will return.

So whoever does righteous deeds while he is a believer - no denial will there be for his effort, and indeed We, of it, are recorders.

Until when [the dam of] Gog and Magog has been opened and they, from every elevation, descend

And [when] the true promise has approached; then suddenly the eyes of those who disbelieved will be staring [in horror, while they say], |O woe to us; we had been unmindful of this; rather, we were wrongdoers.

Indeed, you [disbelievers] and what you worship other than Allah are the firewood of Hell. You will be coming to [enter] it.

Had these [false deities] been [actual] gods, they would not have come to it, but all are eternal therein.

For them therein is heavy sighing, and they therein will not hear.

Indeed, those for whom the best [reward] has preceded from Us - they are from it far removed.