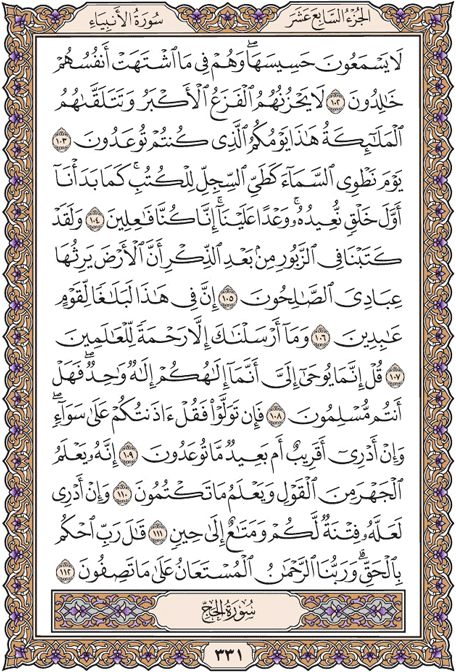 They will not hear its sound, while they are, in that which their souls desire, abiding eternally.

They will not be grieved by the greatest terror, and the angels will meet them, [saying], |This is your Day which you have been promised| -

The Day when We will fold the heaven like the folding of a [written] sheet for the records. As We began the first creation, We will repeat it. [That is] a promise binding upon Us. Indeed, We will do it.

And We have already written in the book [of Psalms] after the [previous] mention that the land [of Paradise] is inherited by My righteous servants.

Indeed, in this [Qur'an] is notification for a worshipping people.

And We have not sent you, [O Muúammad], except as a mercy to the worlds.

Say, |It is only revealed to me that your god is but one God; so will you be Muslims [in submission to Him]?|

But if they turn away, then say, |I have announced to [all of] you equally. And I know not whether near or far is that which you are promised.

And I know not; perhaps it is a trial for you and enjoyment for a time.

[The Prophet] has said, |My Lord, judge [between us] in truth. And our Lord is the Most Merciful, the one whose help is sought against that which you describe.