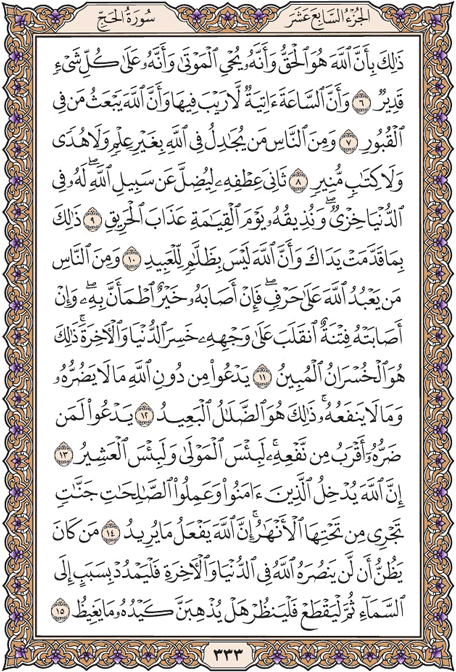 And [that they may know] that the Hour is coming - no doubt about it - and that Allah will resurrect those in the graves.

And of the people is he who disputes about Allah without knowledge or guidance or an enlightening book [from Him],

Twisting his neck [in arrogance] to mislead [people] from the way of Allah . For him in the world is disgrace, and We will make him taste on the Day of Resurrection the punishment of the Burning Fire [while it is said],

|That is for what your hands have put forth and because Allah is not ever unjust to [His] servants.

And of the people is he who worships Allah on an edge. If he is touched by good, he is reassured by it; but if he is struck by trial, he turns on his face [to the other direction]. He has lost [this] world and the Hereafter. That is what is the manifest loss.

He invokes instead of Allah that which neither harms him nor benefits him. That is what is the extreme error.

Indeed, Allah will admit those who believe and do righteous deeds to gardens beneath which rivers flow. Indeed, Allah does what He intends.

Whoever should think that Allah will not support [Prophet Muúammad] in this world and the Hereafter - let him extend a rope to the ceiling, then cut off [his breath], and let him see: will his effort remove that which enrages [him]?