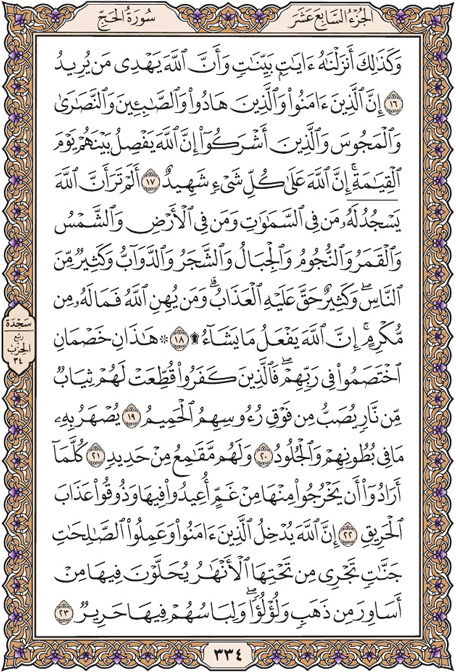 And thus have We sent the Qur'an down as verses of clear evidence and because Allah guides whom He intends.

Do you not see that to Allah prostrates whoever is in the heavens and whoever is on the earth and the sun, the moon, the stars, the mountains, the trees, the moving creatures and many of the people? But upon many the punishment has been justified. And he whom Allah humiliates - for him there is no bestower of honor. Indeed, Allah does what He wills.

These are two adversaries who have disputed over their Lord. But those who disbelieved will have cut out for them garments of fire. Poured upon their heads will be scalding water

By which is melted that within their bellies and [their] skins.

And for [striking] them are maces of iron.

Every time they want to get out of Hellfire from anguish, they will be returned to it, and [it will be said], |Taste the punishment of the Burning Fire!|

Indeed, Allah will admit those who believe and do righteous deeds to gardens beneath which rivers flow. They will be adorned therein with bracelets of gold and pearl, and their garments therein will be silk.