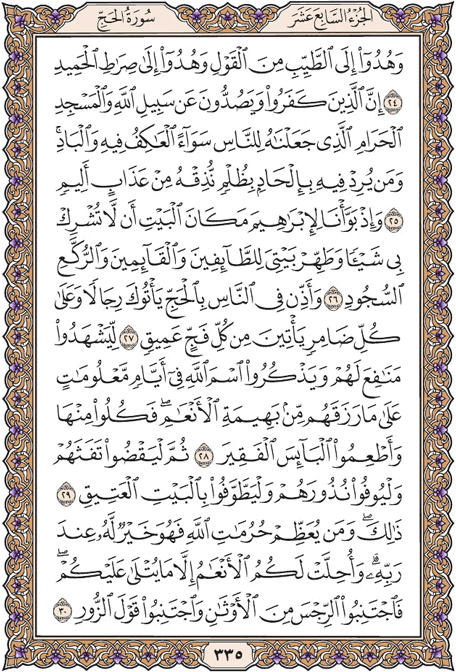 And they had been guided [in worldly life] to good speech, and they were guided to the path of the Praiseworthy.

Indeed, those who have disbelieved and avert [people] from the way of Allah and [from] al-Masjid al-îaram, which We made for the people - equal are the resident therein and one from outside; and [also] whoever intends [a deed] therein of deviation [in religion] or wrongdoing - We will make him taste of a painful punishment.

And [mention, O Muúammad], when We designated for Abraham the site of the House, [saying], |Do not associate anything with Me and purify My House for those who perform Tawaf and those who stand [in prayer] and those who bow and prostrate.

That they may witness benefits for themselves and mention the name of Allah on known days over what He has provided for them of [sacrificial] animals. So eat of them and feed the miserable and poor.

Then let them end their untidiness and fulfill their vows and perform Tawaf around the ancient House.

That [has been commanded], and whoever honors the sacred ordinances of Allah - it is best for him in the sight of his Lord. And permitted to you are the grazing livestock, except what is recited to you. So avoid the uncleanliness of idols and avoid false statement,