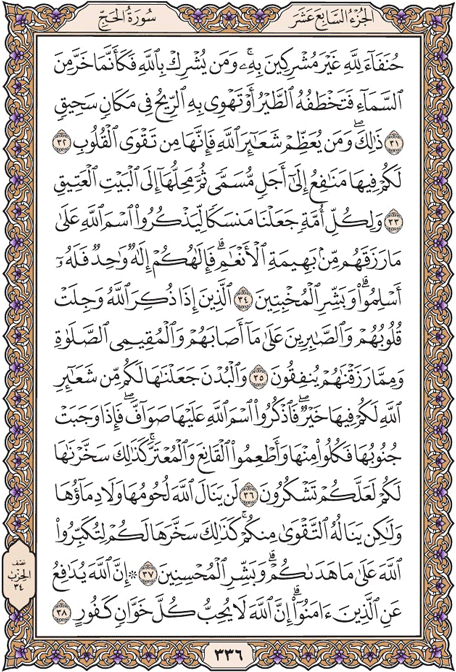 Inclining [only] to Allah , not associating [anything] with Him. And he who associates with Allah - it is as though he had fallen from the sky and was snatched by the birds or the wind carried him down into a remote place.

That [is so]. And whoever honors the symbols of Allah - indeed, it is from the piety of hearts.

For you the animals marked for sacrifice are benefits for a specified term; then their place of sacrifice is at the ancient House.

And for all religion We have appointed a rite [of sacrifice] that they may mention the name of Allah over what He has provided for them of [sacrificial] animals. For your god is one God, so to Him submit. And, [O Muúammad], give good tidings to the humble [before their Lord]

Who, when Allah is mentioned, their hearts are fearful, and [to] the patient over what has afflicted them, and the establishers of prayer and those who spend from what We have provided them.

And the camels and cattle We have appointed for you as among the symbols of Allah ; for you therein is good. So mention the name of Allah upon them when lined up [for sacrifice]; and when they are [lifeless] on their sides, then eat from them and feed the needy and the beggar. Thus have We subjected them to you that you may be grateful.

Their meat will not reach Allah , nor will their blood, but what reaches Him is piety from you. Thus have We subjected them to you that you may glorify Allah for that [to] which He has guided you; and give good tidings to the doers of good.