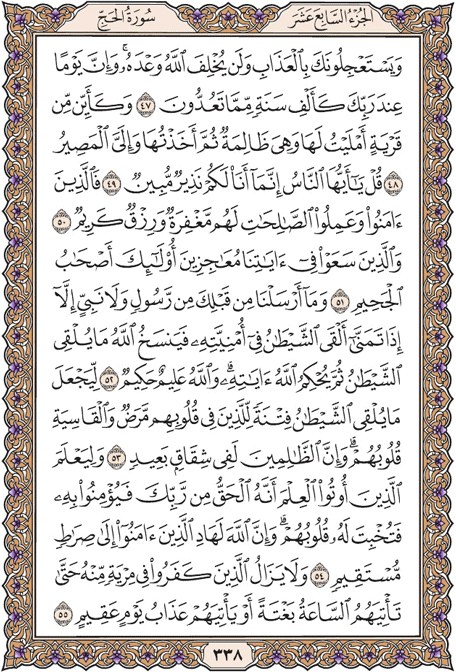 And they urge you to hasten the punishment. But Allah will never fail in His promise. And indeed, a day with your Lord is like a thousand years of those which you count.

And for how many a city did I prolong enjoyment while it was committing wrong. Then I seized it, and to Me is the [final] destination.

Say, |O people, I am only to you a clear warner.

And those who have believed and done righteous deeds - for them is forgiveness and noble provision.

But the ones who strove against Our verses, [seeking] to cause failure - those are the companions of Hellfire.

And We did not send before you any messenger or prophet except that when he spoke [or recited], Satan threw into it [some misunderstanding]. But Allah abolishes that which Satan throws in; then Allah makes precise His verses. And Allah is Knowing and Wise.

[That is] so He may make what Satan throws in a trial for those within whose hearts is disease and those hard of heart. And indeed, the wrongdoers are in extreme dissension.

And so those who were given knowledge may know that it is the truth from your Lord and [therefore] believe in it, and their hearts humbly submit to it. And indeed is Allah the Guide of those who have believed to a straight path.

But those who disbelieve will not cease to be in doubt of it until the Hour comes upon them unexpectedly or there comes to them the punishment of a barren Day.