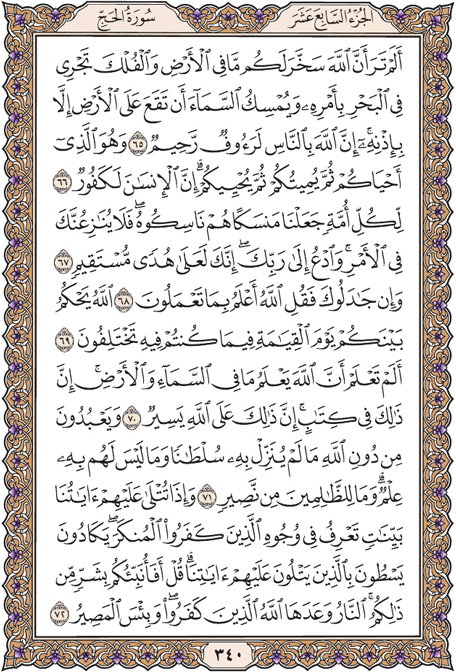 Do you not see that Allah has subjected to you whatever is on the earth and the ships which run through the sea by His command? And He restrains the sky from falling upon the earth, unless by His permission. Indeed Allah , to the people, is Kind and Merciful.

And He is the one who gave you life; then He causes you to die and then will [again] give you life. Indeed, mankind is ungrateful.

For every religion We have appointed rites which they perform. So, [O Muúammad], let the disbelievers not contend with you over the matter but invite them to your Lord. Indeed, you are upon straight guidance.

And if they dispute with you, then say, | Allah is most knowing of what you do.

Allah will judge between you on the Day of Resurrection concerning that over which you used to differ.

Do you not know that Allah knows what is in the heaven and earth? Indeed, that is in a Record. Indeed that, for Allah , is easy.

And they worship besides Allah that for which He has not sent down authority and that of which they have no knowledge. And there will not be for the wrongdoers any helper.

And when Our verses are recited to them as clear evidences, you recognize in the faces of those who disbelieve disapproval. They are almost on the verge of assaulting those who recite to them Our verses. Say, |Then shall I inform you of [what is] worse than that? [It is] the Fire which Allah has promised those who disbelieve, and wretched is the destination.