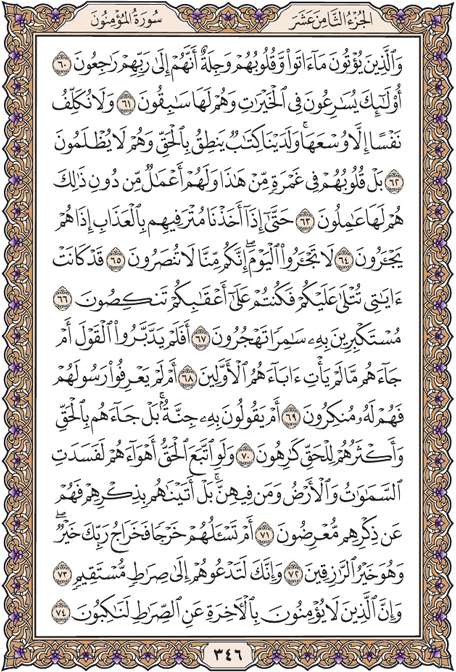 It is those who hasten to good deeds, and they outstrip [others] therein.

And We charge no soul except [with that within] its capacity, and with Us is a record which speaks with truth; and they will not be wronged.

But their hearts are covered with confusion over this, and they have [evil] deeds besides disbelief which they are doing,

Until when We seize their affluent ones with punishment, at once they are crying [to Allah ] for help.

Do not cry out today. Indeed, by Us you will not be helped.

My verses had already been recited to you, but you were turning back on your heels

In arrogance regarding it, conversing by night, speaking evil.

Then have they not reflected over the Qur'an, or has there come to them that which had not come to their forefathers?

Or did they not know their Messenger, so they are toward him disacknowledging?

Or do they say, |In him is madness?| Rather, he brought them the truth, but most of them, to the truth, are averse.

But if the Truth had followed their inclinations, the heavens and the earth and whoever is in them would have been ruined. Rather, We have brought them their message, but they, from their message, are turning away.

Or do you, [O Muúammad], ask them for payment? But the reward of your Lord is best, and He is the best of providers.

And indeed, you invite them to a straight path.

But indeed, those who do not believe in the Hereafter are deviating from the path.