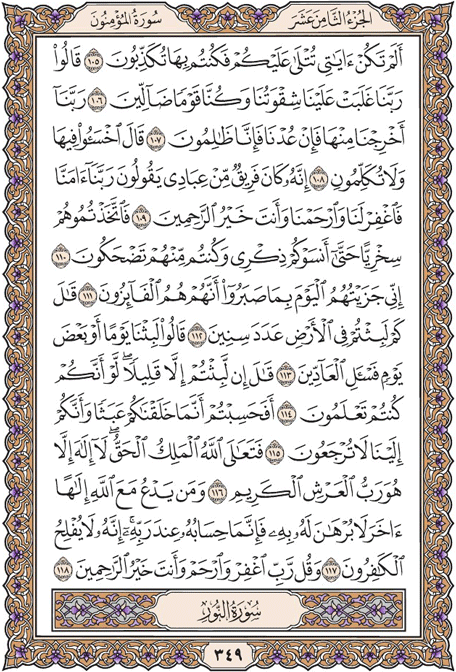 [It will be said]. |Were not My verses recited to you and you used to deny them?|

They will say, |Our Lord, our wretchedness overcame us, and we were a people astray.

Our Lord, remove us from it, and if we were to return [to evil], we would indeed be wrongdoers.

He will say, |Remain despised therein and do not speak to Me.

Indeed, there was a party of My servants who said, 'Our Lord, we have believed, so forgive us and have mercy upon us, and You are the best of the merciful.'

But you took them in mockery to the point that they made you forget My remembrance, and you used to laugh at them.

Indeed, I have rewarded them this Day for their patient endurance - that they are the attainers [of success].

[ Allah ] will say, |How long did you remain on earth in number of years?|

They will say, |We remained a day or part of a day; ask those who enumerate.

He will say, |You stayed not but a little - if only you had known.

Then did you think that We created you uselessly and that to Us you would not be returned?|

So exalted is Allah , the Sovereign, the Truth; there is no deity except Him, Lord of the Noble Throne.

And whoever invokes besides Allah another deity for which he has no proof - then his account is only with his Lord. Indeed, the disbelievers will not succeed.

And, [O Muúammad], say, |My Lord, forgive and have mercy, and You are the best of the merciful.