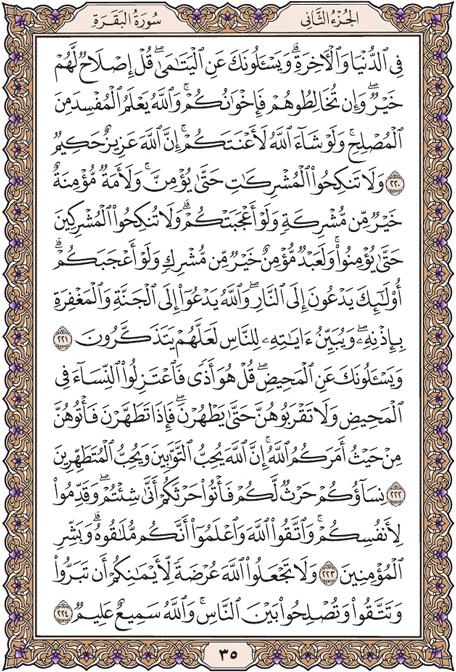 To this world and the Hereafter. And they ask you about orphans. Say, |Improvement for them is best. And if you mix your affairs with theirs - they are your brothers. And Allah knows the corrupter from the amender. And if Allah had willed, He could have put you in difficulty. Indeed, Allah is Exalted in Might and Wise.

And they ask you about menstruation. Say, |It is harm, so keep away from wives during menstruation. And do not approach them until they are pure. And when they have purified themselves, then come to them from where Allah has ordained for you. Indeed, Allah loves those who are constantly repentant and loves those who purify themselves.

Your wives are a place of sowing of seed for you, so come to your place of cultivation however you wish and put forth [righteousness] for yourselves. And fear Allah and know that you will meet Him. And give good tidings to the believers.

And do not make [your oath by] Allah an excuse against being righteous and fearing Allah and making peace among people. And Allah is Hearing and Knowing.