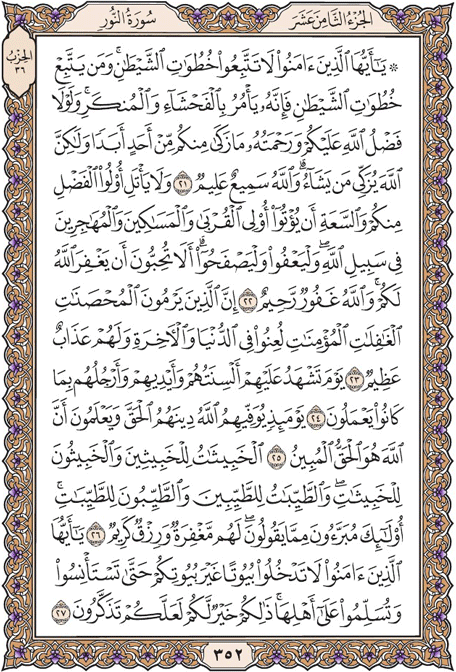 O you who have believed, do not follow the footsteps of Satan. And whoever follows the footsteps of Satan - indeed, he enjoins immorality and wrongdoing. And if not for the favor of Allah upon you and His mercy, not one of you would have been pure, ever, but Allah purifies whom He wills, and Allah is Hearing and Knowing.

And let not those of virtue among you and wealth swear not to give [aid] to their relatives and the needy and the emigrants for the cause of Allah , and let them pardon and overlook. Would you not like that Allah should forgive you? And Allah is Forgiving and Merciful.

Indeed, those who [falsely] accuse chaste, unaware and believing women are cursed in this world and the Hereafter; and they will have a great punishment

On a Day when their tongues, their hands and their feet will bear witness against them as to what they used to do.

That Day, Allah will pay them in full their deserved recompense, and they will know that it is Allah who is the perfect in justice.

Evil words are for evil men, and evil men are [subjected] to evil words. And good words are for good men, and good men are [an object] of good words. Those [good people] are declared innocent of what the slanderers say. For them is forgiveness and noble provision.

O you who have believed, do not enter houses other than your own houses until you ascertain welcome and greet their inhabitants. That is best for you; perhaps you will be reminded.