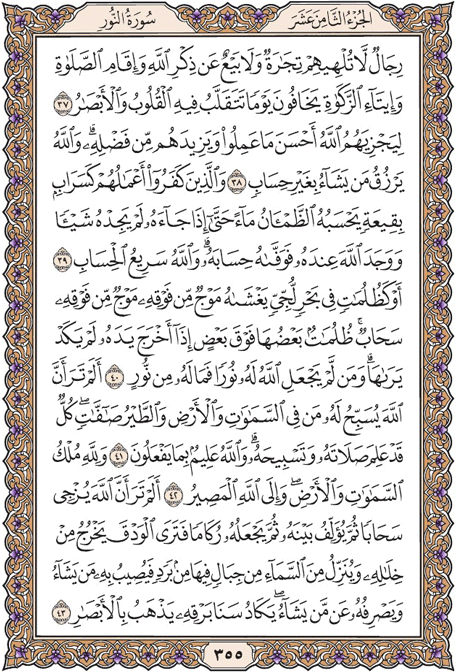 [Are] men whom neither commerce nor sale distracts from the remembrance of Allah and performance of prayer and giving of zakah. They fear a Day in which the hearts and eyes will [fearfully] turn about -

That Allah may reward them [according to] the best of what they did and increase them from His bounty. And Allah gives provision to whom He wills without account.

But those who disbelieved - their deeds are like a mirage in a lowland which a thirsty one thinks is water until, when he comes to it, he finds it is nothing but finds Allah before Him, and He will pay him in full his due; and Allah is swift in account.

Or [they are] like darknesses within an unfathomable sea which is covered by waves, upon which are waves, over which are clouds - darknesses, some of them upon others. When one puts out his hand [therein], he can hardly see it. And he to whom Allah has not granted light - for him there is no light.

Do you not see that Allah is exalted by whomever is within the heavens and the earth and [by] the birds with wings spread [in flight]? Each [of them] has known his [means of] prayer and exalting [Him], and Allah is Knowing of what they do.

And to Allah belongs the dominion of the heavens and the earth, and to Allah is the destination.

Do you not see that Allah drives clouds? Then He brings them together, then He makes them into a mass, and you see the rain emerge from within it. And He sends down from the sky, mountains [of clouds] within which is hail, and He strikes with it whom He wills and averts it from whom He wills. The flash of its lightening almost takes away the eyesight.