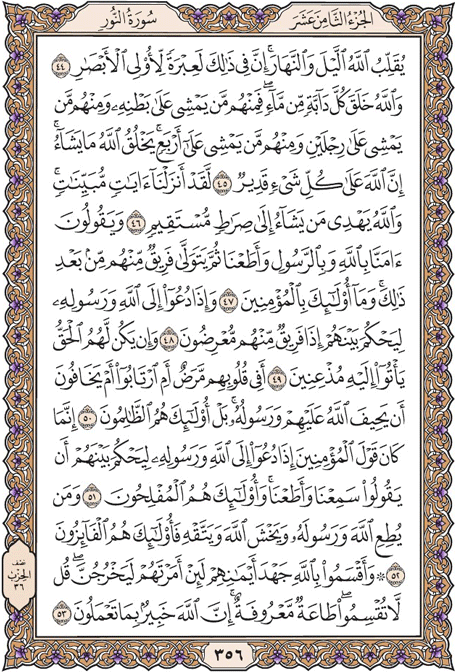 Allah alternates the night and the day. Indeed in that is a lesson for those who have vision.

We have certainly sent down distinct verses. And Allah guides whom He wills to a straight path.

But the hypocrites say, |We have believed in Allah and in the Messenger, and we obey|; then a party of them turns away after that. And those are not believers.

And when they are called to [the words of] Allah and His Messenger to judge between them, at once a party of them turns aside [in refusal].

But if the right is theirs, they come to him in prompt obedience.

Is there disease in their hearts? Or have they doubted? Or do they fear that Allah will be unjust to them, or His Messenger? Rather, it is they who are the wrongdoers.

The only statement of the [true] believers when they are called to Allah and His Messenger to judge between them is that they say, |We hear and we obey.| And those are the successful.

And whoever obeys Allah and His Messenger and fears Allah and is conscious of Him - it is those who are the attainers.

And they swear by Allah their strongest oaths that if you ordered them, they would go forth [in Allah 's cause]. Say, |Do not swear. [Such] obedience is known. Indeed, Allah is Acquainted with that which you do.