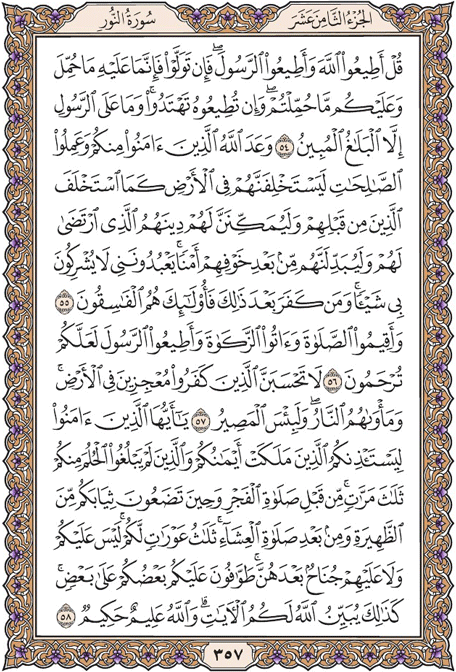 Say, |Obey Allah and obey the Messenger; but if you turn away - then upon him is only that [duty] with which he has been charged, and upon you is that with which you have been charged. And if you obey him, you will be [rightly] guided. And there is not upon the Messenger except the [responsibility for] clear notification.

And establish prayer and give zakah and obey the Messenger - that you may receive mercy.

Never think that the disbelievers are causing failure [to Allah ] upon the earth. Their refuge will be the Fire - and how wretched the destination.

O you who have believed, let those whom your right hands possess and those who have not [yet] reached puberty among you ask permission of you [before entering] at three times: before the dawn prayer and when you put aside your clothing [for rest] at noon and after the night prayer. [These are] three times of privacy for you. There is no blame upon you nor upon them beyond these [periods], for they continually circulate among you - some of you, among others. Thus does Allah make clear to you the verses; and Allah is Knowing and Wise.