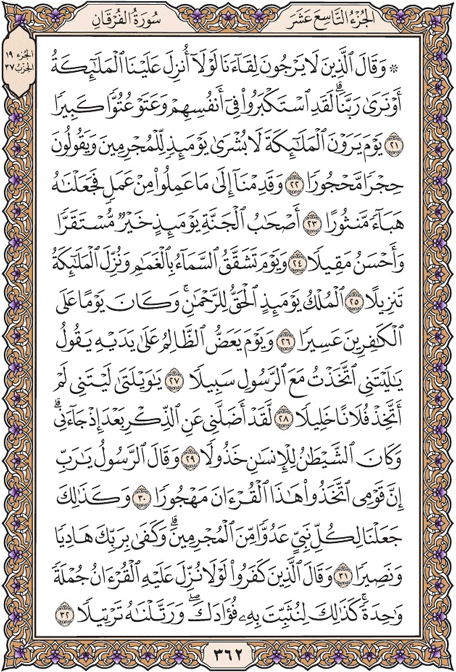 And those who do not expect the meeting with Us say, |Why were not angels sent down to us, or [why] do we [not] see our Lord?| They have certainly become arrogant within themselves and [become] insolent with great insolence.

The day they see the angels - no good tidings will there be that day for the criminals, and [the angels] will say, |Prevented and inaccessible.

And We will regard what they have done of deeds and make them as dust dispersed.

The companions of Paradise, that Day, are [in] a better settlement and better resting place.

And [mention] the Day when the heaven will split open with [emerging] clouds, and the angels will be sent down in successive descent.

True sovereignty, that Day, is for the Most Merciful. And it will be upon the disbelievers a difficult Day.

And the Day the wrongdoer will bite on his hands [in regret] he will say, |Oh, I wish I had taken with the Messenger a way.

Oh, woe to me! I wish I had not taken that one as a friend.

He led me away from the remembrance after it had come to me. And ever is Satan, to man, a deserter.

And the Messenger has said, |O my Lord, indeed my people have taken this Qur'an as [a thing] abandoned.

And thus have We made for every prophet an enemy from among the criminals. But sufficient is your Lord as a guide and a helper.

And those who disbelieve say, |Why was the Qur'an not revealed to him all at once?| Thus [it is] that We may strengthen thereby your heart. And We have spaced it distinctly.