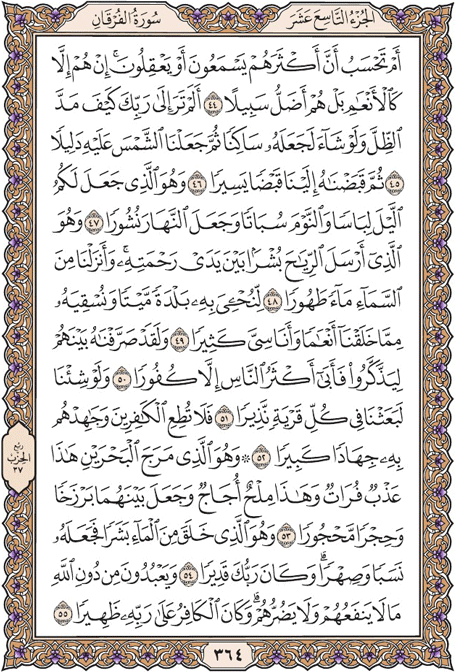 Or do you think that most of them hear or reason? They are not except like livestock. Rather, they are [even] more astray in [their] way.

Have you not considered your Lord - how He extends the shadow, and if He willed, He could have made it stationary? Then We made the sun for it an indication.

Then We hold it in hand for a brief grasp.

And it is He who has made the night for you as clothing and sleep [a means for] rest and has made the day a resurrection.

And it is He who sends the winds as good tidings before His mercy, and We send down from the sky pure water

That We may bring to life thereby a dead land and give it as drink to those We created of numerous livestock and men.

And We have certainly distributed it among them that they might be reminded, but most of the people refuse except disbelief.

And if We had willed, We could have sent into every city a warner.

So do not obey the disbelievers, and strive against them with the Qur'an a great striving.

And it is He who has released [simultaneously] the two seas, one fresh and sweet and one salty and bitter, and He placed between them a barrier and prohibiting partition.

And it is He who has created from water a human being and made him [a relative by] lineage and marriage. And ever is your Lord competent [concerning creation].

But they worship rather than Allah that which does not benefit them or harm them, and the disbeliever is ever, against his Lord, an assistant [to Satan].