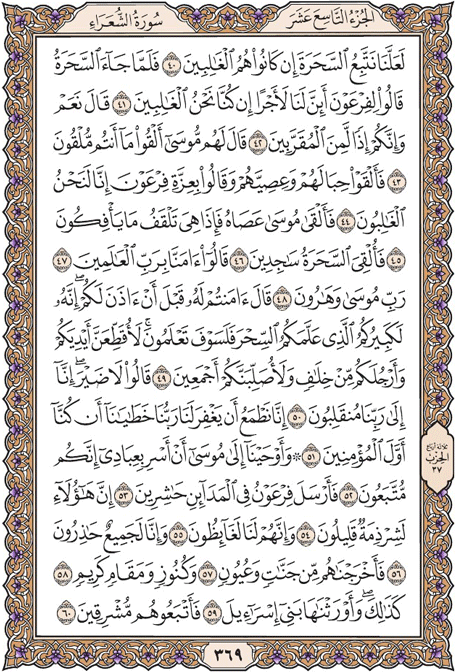 And when the magicians arrived, they said to Pharaoh, |Is there indeed for us a reward if we are the predominant?|

Moses said to them, |Throw whatever you will throw.

So they threw their ropes and their staffs and said, |By the might of Pharaoh, indeed it is we who are predominant.

Then Moses threw his staff, and at once it devoured what they falsified.

So the magicians fell down in prostration [to Allah ].

They said, |We have believed in the Lord of the worlds,

The Lord of Moses and Aaron.

[Pharaoh] said, |You believed Moses before I gave you permission. Indeed, he is your leader who has taught you magic, but you are going to know. I will surely cut off your hands and your feet on opposite sides, and I will surely crucify you all.

They said, |No harm. Indeed, to our Lord we will return.

Indeed, we aspire that our Lord will forgive us our sins because we were the first of the believers.

And We inspired to Moses, |Travel by night with My servants; indeed, you will be pursued.

Then Pharaoh sent among the cities gatherers

[And said], |Indeed, those are but a small band,

And indeed, they are enraging us,

And indeed, we are a cautious society... |

So We removed them from gardens and springs

And treasures and honorable station -

Thus. And We caused to inherit it the Children of Israel.

So they pursued them at sunrise.