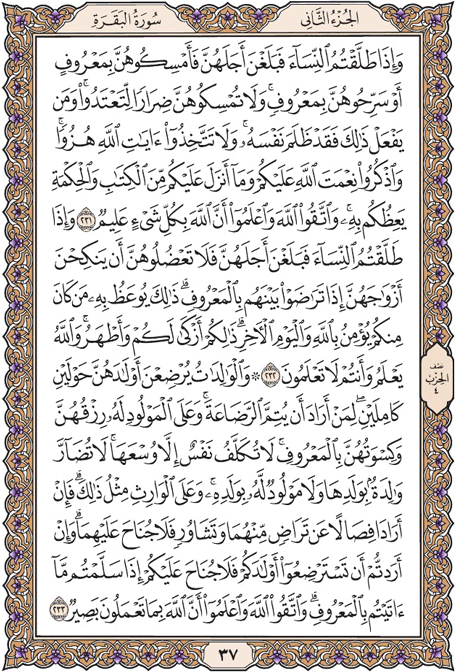 And when you divorce women and they have [nearly] fulfilled their term, either retain them according to acceptable terms or release them according to acceptable terms, and do not keep them, intending harm, to transgress [against them]. And whoever does that has certainly wronged himself. And do not take the verses of Allah in jest. And remember the favor of Allah upon you and what has been revealed to you of the Book and wisdom by which He instructs you. And fear Allah and know that Allah is Knowing of all things.

And when you divorce women and they have fulfilled their term, do not prevent them from remarrying their [former] husbands if they agree among themselves on an acceptable basis. That is instructed to whoever of you believes in Allah and the Last Day. That is better for you and purer, and Allah knows and you know not.

Mothers may breastfeed their children two complete years for whoever wishes to complete the nursing [period]. Upon the father is the mothers' provision and their clothing according to what is acceptable. No person is charged with more than his capacity. No mother should be harmed through her child, and no father through his child. And upon the [father's] heir is [a duty] like that [of the father]. And if they both desire weaning through mutual consent from both of them and consultation, there is no blame upon either of them. And if you wish to have your children nursed by a substitute, there is no blame upon you as long as you give payment according to what is acceptable. And fear Allah and know that Allah is Seeing of what you do.