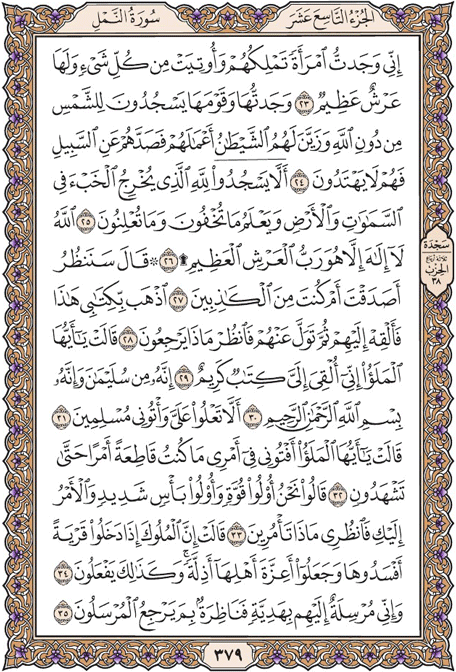 Indeed, I found [there] a woman ruling them, and she has been given of all things, and she has a great throne.

I found her and her people prostrating to the sun instead of Allah , and Satan has made their deeds pleasing to them and averted them from [His] way, so they are not guided,

[And] so they do not prostrate to Allah , who brings forth what is hidden within the heavens and the earth and knows what you conceal and what you declare -

Allah - there is no deity except Him, Lord of the Great Throne.

[Solomon] said, |We will see whether you were truthful or were of the liars.

Take this letter of mine and deliver it to them. Then leave them and see what [answer] they will return.

She said, |O eminent ones, indeed, to me has been delivered a noble letter.

Indeed, it is from Solomon, and indeed, it reads: 'In the name of Allah , the Entirely Merciful, the Especially Merciful,

Be not haughty with me but come to me in submission [as Muslims].' |

She said, |O eminent ones, advise me in my affair. I would not decide a matter until you witness [for] me.

They said, |We are men of strength and of great military might, but the command is yours, so see what you will command.

She said, |Indeed kings - when they enter a city, they ruin it and render the honored of its people humbled. And thus do they do.

But indeed, I will send to them a gift and see with what [reply] the messengers will return.