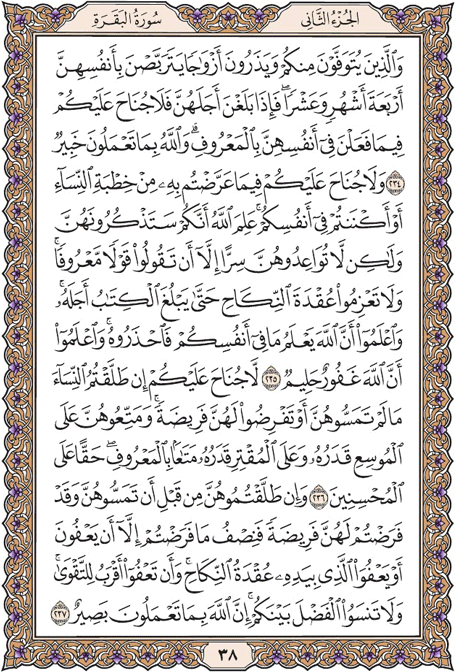 And those who are taken in death among you and leave wives behind - they, [the wives, shall] wait four months and ten [days]. And when they have fulfilled their term, then there is no blame upon you for what they do with themselves in an acceptable manner. And Allah is [fully] Acquainted with what you do.

There is no blame upon you for that to which you [indirectly] allude concerning a proposal to women or for what you conceal within yourselves. Allah knows that you will have them in mind. But do not promise them secretly except for saying a proper saying. And do not determine to undertake a marriage contract until the decreed period reaches its end. And know that Allah knows what is within yourselves, so beware of Him. And know that Allah is Forgiving and Forbearing.

And if you divorce them before you have touched them and you have already specified for them an obligation, then [give] half of what you specified - unless they forego the right or the one in whose hand is the marriage contract foregoes it. And to forego it is nearer to righteousness. And do not forget graciousness between you. Indeed Allah , of whatever you do, is Seeing.