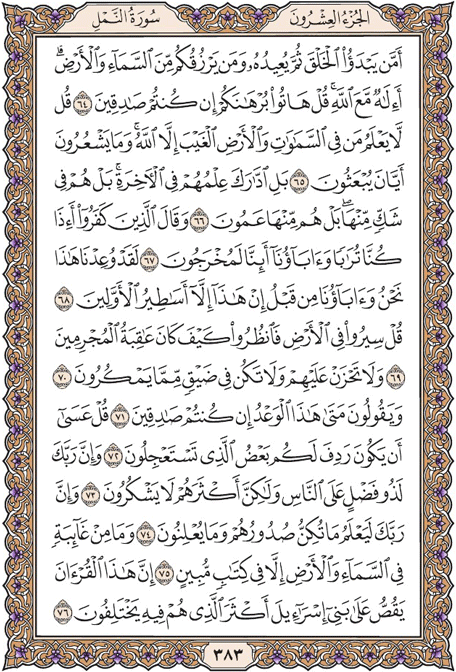 Is He [not best] who begins creation and then repeats it and who provides for you from the heaven and earth? Is there a deity with Allah ? Say, |Produce your proof, if you should be truthful.

Say, |None in the heavens and earth knows the unseen except Allah , and they do not perceive when they will be resurrected.

And those who disbelieve say, |When we have become dust as well as our forefathers, will we indeed be brought out [of the graves]?

We have been promised this, we and our forefathers, before. This is not but legends of the former peoples.

Say, [O Muúammad], |Travel through the land and observe how was the end of the criminals.

And grieve not over them or be in distress from what they conspire.

And they say, |When is [the fulfillment of] this promise, if you should be truthful?|

Say, |Perhaps it is close behind you - some of that for which you are impatient.

And indeed, your Lord is full of bounty for the people, but most of them do not show gratitude.

And indeed, your Lord knows what their breasts conceal and what they declare.

And there is nothing concealed within the heaven and the earth except that it is in a clear Register.

Indeed, this Qur'an relates to the Children of Israel most of that over which they disagree.