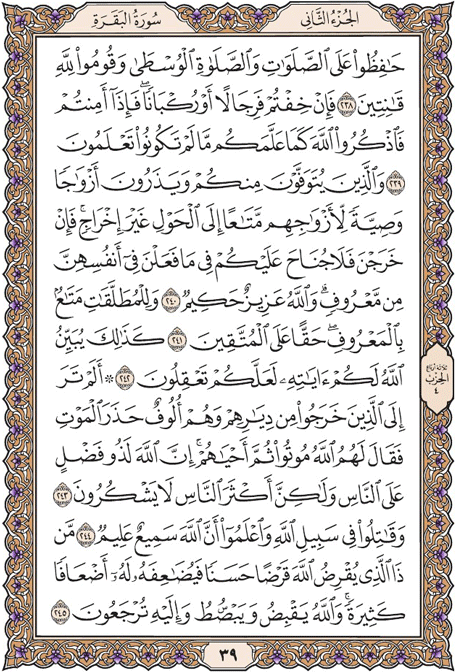 Maintain with care the [obligatory] prayers and [in particular] the middle prayer and stand before Allah , devoutly obedient.

And if you fear [an enemy, then pray] on foot or riding. But when you are secure, then remember Allah [in prayer], as He has taught you that which you did not [previously] know.

And those who are taken in death among you and leave wives behind - for their wives is a bequest: maintenance for one year without turning [them] out. But if they leave [of their own accord], then there is no blame upon you for what they do with themselves in an acceptable way. And Allah is Exalted in Might and Wise.

And for divorced women is a provision according to what is acceptable - a duty upon the righteous.

Thus does Allah make clear to you His verses that you might use reason.

Have you not considered those who left their homes in many thousands, fearing death? Allah said to them, |Die|; then He restored them to life. And Allah is full of bounty to the people, but most of the people do not show gratitude.

And fight in the cause of Allah and know that Allah is Hearing and Knowing.

Who is it that would loan Allah a goodly loan so He may multiply it for him many times over? And it is Allah who withholds and grants abundance, and to Him you will be returned.