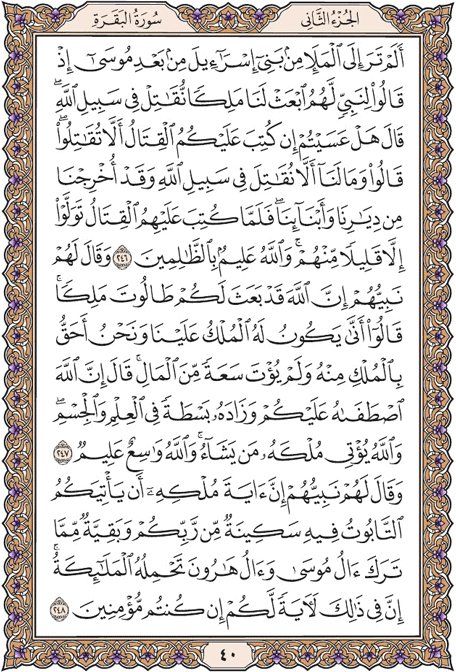 Have you not considered the assembly of the Children of Israel after [the time of] Moses when they said to a prophet of theirs, |Send to us a king, and we will fight in the way of Allah |? He said, |Would you perhaps refrain from fighting if fighting was prescribed for you?| They said, |And why should we not fight in the cause of Allah when we have been driven out from our homes and from our children?| But when fighting was prescribed for them, they turned away, except for a few of them. And Allah is Knowing of the wrongdoers.

And their prophet said to them, |Indeed, Allah has sent to you Saul as a king.| They said, |How can he have kingship over us while we are more worthy of kingship than him and he has not been given any measure of wealth?| He said, |Indeed, Allah has chosen him over you and has increased him abundantly in knowledge and stature. And Allah gives His sovereignty to whom He wills. And Allah is all-Encompassing [in favor] and Knowing.

And their prophet said to them, |Indeed, a sign of his kingship is that the chest will come to you in which is assurance from your Lord and a remnant of what the family of Moses and the family of Aaron had left, carried by the angels. Indeed in that is a sign for you, if you are believers.