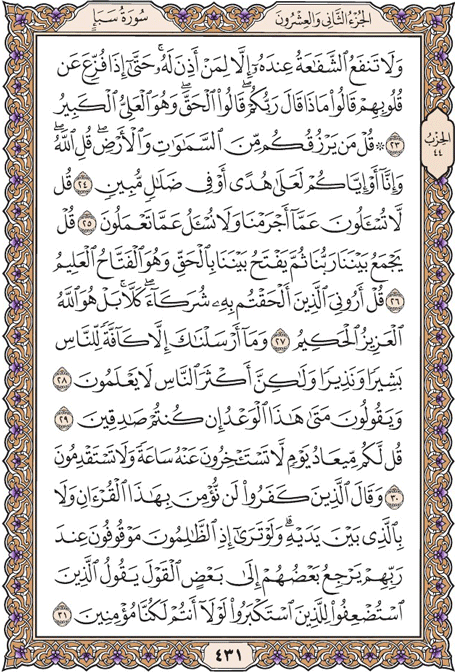 And intercession does not benefit with Him except for one whom He permits. [And those wait] until, when terror is removed from their hearts, they will say [to one another], |What has your Lord said?| They will say, |The truth.| And He is the Most High, the Grand.

Say, |Who provides for you from the heavens and the earth?| Say, | Allah . And indeed, we or you are either upon guidance or in clear error.

Say, |Our Lord will bring us together; then He will judge between us in truth. And He is the Knowing Judge.

Say, |Show me those whom you have attached to Him as partners. No! Rather, He [alone] is Allah , the Exalted in Might, the Wise.

And We have not sent you except comprehensively to mankind as a bringer of good tidings and a warner. But most of the people do not know.

Say, |For you is the appointment of a Day [when] you will not remain thereafter an hour, nor will you precede [it].

And those who disbelieve say, |We will never believe in this Qur'an nor in that before it.| But if you could see when the wrongdoers are made to stand before their Lord, refuting each other's words... Those who were oppressed will say to those who were arrogant, |If not for you, we would have been believers.