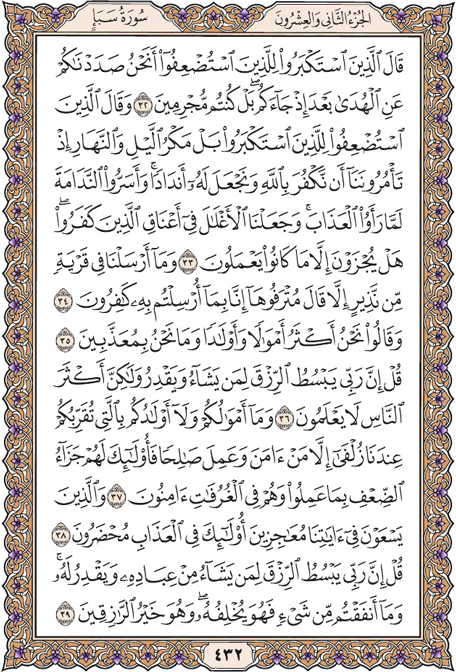 Those who were arrogant will say to those who were oppressed, |Did we avert you from guidance after it had come to you? Rather, you were criminals.

Those who were oppressed will say to those who were arrogant, |Rather, [it was your] conspiracy of night and day when you were ordering us to disbelieve in Allah and attribute to Him equals.| But they will [all] confide regret when they see the punishment; and We will put shackles on the necks of those who disbelieved. Will they be recompensed except for what they used to do?

And We did not send into a city any warner except that its affluent said, |Indeed we, in that with which you were sent, are disbelievers.

And they said, |We are more [than the believers] in wealth and children, and we are not to be punished.

Say, |Indeed, my Lord extends provision for whom He wills and restricts [it], but most of the people do not know.

And it is not your wealth or your children that bring you nearer to Us in position, but it is [by being] one who has believed and done righteousness. For them there will be the double reward for what they did, and they will be in the upper chambers [of Paradise], safe [and secure].

And the ones who strive against Our verses to cause [them] failure - those will be brought into the punishment [to remain].

Say, |Indeed, my Lord extends provision for whom He wills of His servants and restricts [it] for him. But whatever thing you spend [in His cause] - He will compensate it; and He is the best of providers.