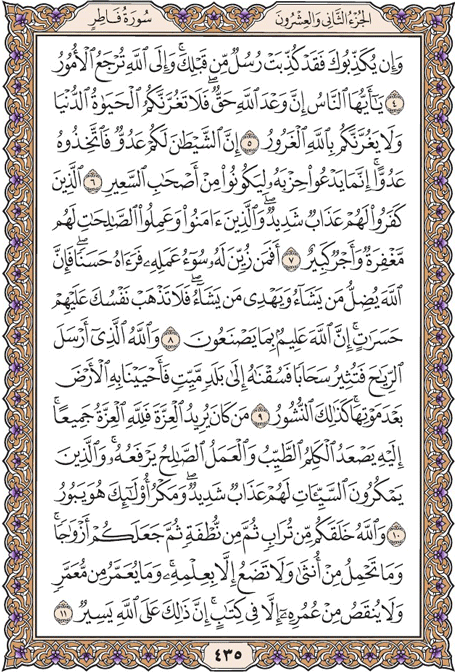 And if they deny you, [O Muúammad] - already were messengers denied before you. And to Allah are returned [all] matters.

O mankind, indeed the promise of Allah is truth, so let not the worldly life delude you and be not deceived about Allah by the Deceiver.

Indeed, Satan is an enemy to you; so take him as an enemy. He only invites his party to be among the companions of the Blaze.

Those who disbelieve will have a severe punishment, and those who believe and do righteous deeds will have forgiveness and great reward.

Then is one to whom the evil of his deed has been made attractive so he considers it good [like one rightly guided]? For indeed, Allah sends astray whom He wills and guides whom He wills. So do not let yourself perish over them in regret. Indeed, Allah is Knowing of what they do.

And it is Allah who sends the winds, and they stir the clouds, and We drive them to a dead land and give life thereby to the earth after its lifelessness. Thus is the resurrection.

Whoever desires honor [through power] - then to Allah belongs all honor. To Him ascends good speech, and righteous work raises it. But they who plot evil deeds will have a severe punishment, and the plotting of those - it will perish.

And Allah created you from dust, then from a sperm-drop; then He made you mates. And no female conceives nor does she give birth except with His knowledge. And no aged person is granted [additional] life nor is his lifespan lessened but that it is in a register. Indeed, that for Allah is easy.