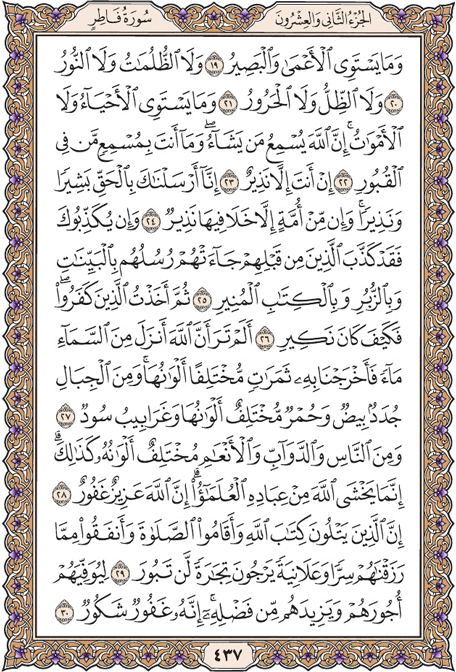 Not equal are the blind and the seeing,

Nor are the darknesses and the light,

Nor are the shade and the heat,

And not equal are the living and the dead. Indeed, Allah causes to hear whom He wills, but you cannot make hear those in the graves.

You, [O Muúammad], are not but a warner.

Indeed, We have sent you with the truth as a bringer of good tidings and a warner. And there was no nation but that there had passed within it a warner.

And if they deny you - then already have those before them denied. Their messengers came to them with clear proofs and written ordinances and with the enlightening Scripture.

Then I seized the ones who disbelieved, and how [terrible] was My reproach.

Do you not see that Allah sends down rain from the sky, and We produce thereby fruits of varying colors? And in the mountains are tracts, white and red of varying shades and [some] extremely black.

And among people and moving creatures and grazing livestock are various colors similarly. Only those fear Allah , from among His servants, who have knowledge. Indeed, Allah is Exalted in Might and Forgiving.

Indeed, those who recite the Book of Allah and establish prayer and spend [in His cause] out of what We have provided them, secretly and publicly, [can] expect a profit that will never perish -

That He may give them in full their rewards and increase for them of His bounty. Indeed, He is Forgiving and Appreciative.