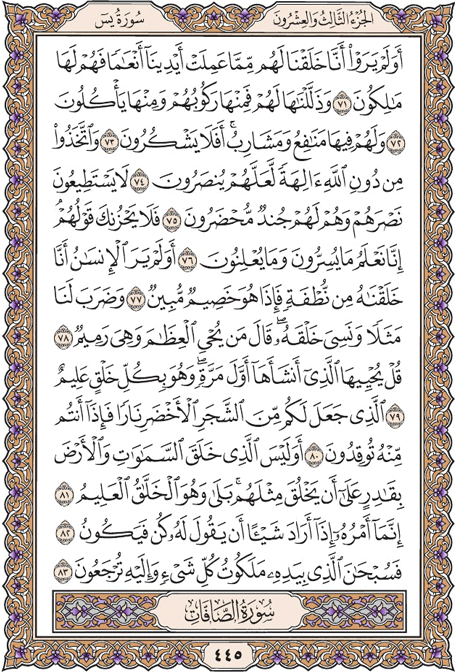 Do they not see that We have created for them from what Our hands have made, grazing livestock, and [then] they are their owners?

And for them therein are [other] benefits and drinks, so will they not be grateful?

But they have taken besides Allah [false] deities that perhaps they would be helped.

They are not able to help them, and they [themselves] are for them soldiers in attendance.

So let not their speech grieve you. Indeed, We know what they conceal and what they declare.

Does man not consider that We created him from a [mere] sperm-drop - then at once he is a clear adversary?

And he presents for Us an example and forgets his [own] creation. He says, |Who will give life to bones while they are disintegrated?|

Say, |He will give them life who produced them the first time; and He is, of all creation, Knowing.

[It is] He who made for you from the green tree, fire, and then from it you ignite.

Is not He who created the heavens and the earth Able to create the likes of them? Yes, [it is so]; and He is the Knowing Creator.

His command is only when He intends a thing that He says to it, |Be,| and it is.

So exalted is He in whose hand is the realm of all things, and to Him you will be returned.